Leland is the only person drafted into the National Football League to have flown in space. The Pro Football Hall of Fame honored his athletic and academic accomplishments by placing his Detroit Lions jersey under glass in Canton, Ohio. Through these professional experiences working on high stakes teams he developed a deep and nuanced understanding of effective team dynamics.

Leland has a Bachelor of Science degree in chemistry and a Master’s degree in materials science engineering. He worked at NASA Langley Research Center in the area of nondestructive testing creating optical fiber sensors for measuring damage in aerospace vehicles, resulting in publications in numerous scientific journals. After hanging up his space boots he was appointed head of NASA Education and served as the co-chair on the White House’s Federal Coordination in Science, Technology, Engineering, and Mathematics (S.T.E.M.) Education Task Force developing the nation’s 5-year STEM education plan. Leland was the United States representative and chair of the International Space Education Board (ISEB), a global collaboration on learning about space. He uses his life story as an athlete, astronaut, scientist, engineer, photographer, and musician to help inspire the next generation of explorers to pursue Science, Technology, Engineering, Art, and Mathematics (S.T.E.A.M.) careers. 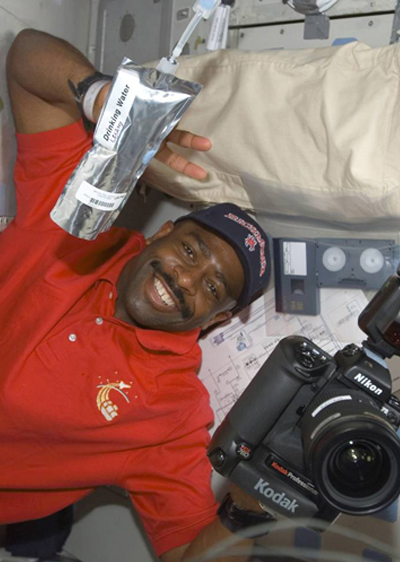 Leland holds four honorary doctorates for his service in education, the sciences and philanthropy. He was chosen as an ICON MANN with Quincy Jones, Forrest Whitaker, Steve Harvey and 24 other men selected for their ability to inspire people of all ages through their vision and commitment to creating positive change throughout the world. Leland has been honored with the NFL Players Association “Award of Excellence” for inspiring athletes to pursue excellence on and off the field. He has written a chapter on the power of visualization in Venus Williams’ book Come to Win. Leland has appeared on Top Chef as a celebrity judge and Bizarre Foods with Andrew Zimmerman, while Cesar Milan helped him with his unruly pooch Jake on an episode of The Dog Whisperer. He was featured in a Sci Fi Channel program documenting the making of the Reach for the Stars will.i.am song, which was transmitted to Mars and back to inspire students to pursue STEAM. After 24 years with NASA as a researcher, astronaut and Senior Executive Service leader he looks to share his stories of perseverance and excellence to inspire communities for lasting positive change.

Leland’s unique travels and experiences have allowed him to create inspired imagery taken on and off planet. He enjoys viewing the beauty and magnitude of the earth through the lens of his camera and cherishes the experience of seeing our planet from space. This perspective is known to create an Orbital Shift that can change an individual’s attitude about how they see their place in the Universe. Leland’s image galleries; On Earth, From Space and In Space, showcase the beauty of our planet and the views that informed his own Orbital Shift. Hopefully these images of our planet, our Universe, and the human made structures inhabiting space will inspire you to help preserve our home.

STS-129 (November 16 to November 29, 2009) was the 31st shuttle flight to the International Space Station. During the mission, the crew delivered two Express Logistics Carriers (ELC racks) to the International Space Station, about 30,000 pounds of replacement parts for systems that provide power to the station, keep it from overheating, and maintain proper orientation in space. The mission also featured three spacewalks. The STS-129 mission was completed in 10 days, 19 hours, 16 minutes and 13 seconds, traveling 4.5 million miles in 171 orbits, and returned to Earth bringing back with them NASA Astronaut, Nicole Stott, following her tour of duty aboard the space station.